We generally meet on the second Tuesday of each month at the United Way of Greater Houston building at 50 Waugh Street, but the actual date, time and location will vary for each event.

Keep Up With Us

There are lots of ways to keep up with the happenings here!

• Reserve a seat at our events on Eventbrite.

The Association of Continuity Professionals is the nation's leading non-profit association, comprised of professionals who are responsible for or have an interest in business continuity, preventing disasters, providing disaster recovery information and facilitating the resumption of normal business activities following a major disaster.

Become a member and join ACP!

What Every Continuity Planner Needs to Know About Cybercrime 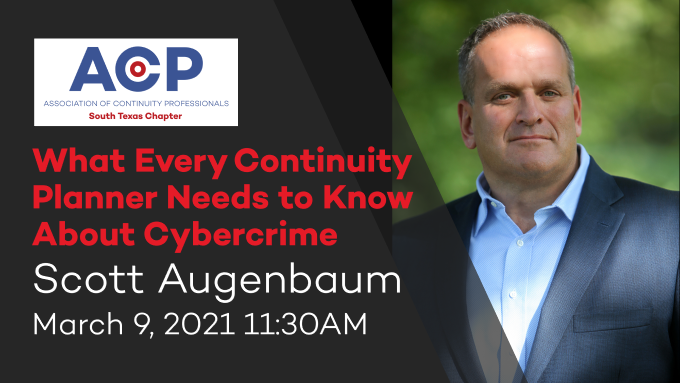 Synopsis: Retired FBI Supervisory Special Agent and Author of the Secret to Cybersecurity, Scott Augenbaum is going to teach you how to reduce your organization's chances of becoming the next Cybercrime victim, without purchasing products or services or having a PhD in Computer Science.

During his over 3 decades with the FBI, Scott responded to thousands of CyberCrime incidents whose victims suffered financial and reputation losses that, to this day, have no chance of being recovered. Through first hand experience, Scott learned the simple non-cost steps that, if taken, could have prevented 90%+ of these losses.

In 1988 Scott joined the FBI’s New York Field Office as a support employee. In 1994 he became a Special Agent and was assigned to the FBI’s Syracuse, New York office where he focused on domestic terrorism, white collar and hate crimes and computer crimes.

In October 2003, Scott was promoted to Supervisory Special Agent in the Cyber Division/Cyber Crime Fraud Unit at the FBI’s Washington, D.C. headquarters where he was responsible for managing the FBI’s Cyber Task Force and Intellectual Property Rights Programs. In 2006, Scott was transferred to the FBI's Nashville office and managed its Computer Instrusion/Counter Intelligence Squad.

Thank you, past sponsors!

If interested in sponsoring ACP South Texas, please contact our This email address is being protected from spambots. You need JavaScript enabled to view it..

Reserve a seat at our events on Eventbrite.